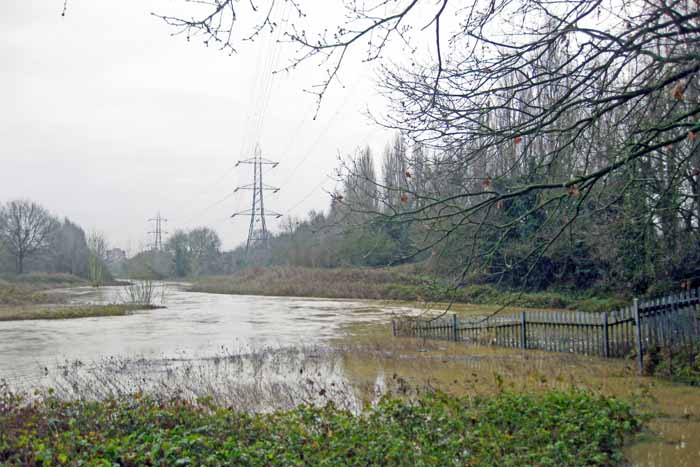 Four days before Christmas, after days of very heavy rain, the water level in the River Roding rose to its highest level for some years and inundated the Ornamental Water. Within hours, the flood began to recede, but several years of low water levels seemed to have been resolved at a stroke, with the lake filled to capacity.

Sadly, for reasons that are not fully understood, the water mostly drained away again within a few months. However, on 15 January of this year, after weeks of steady rain, the river was once again in spate and briefly overtopped the embankment separating it from the Ornamental Water. On this occasion the ingress of water was only enough to raise the level of the lake by a few inches, though there was widespread flooding elsewhere along the valley.

The Roding and the Ornamental Water have a close historical relationship, which looks likely to be revived in a new form. Discussions are being held with the Environment Agency to allow winter pumping from the River Roding into the Ornamental Water, and floods such as we have just seen demonstrate the potential for winter spate pumping to manage lakes levels. However, this also fits into the evolving strategy of creating planned overflow areas to reduce potential flood risk for residents and businesses along the river. In addition, Epping Forest is investigating possible reasons for the increased leakage from the Ornamental Water. The Friends of Wanstead Parklands are supportive of Epping Forest’s water management strategy for Wanstead Park and are pressing for early implementation of these and other key aspects of it. We’ll keep you informed of progress.

← Nuru, Nina and Quinine Go To Wanstead Park
OPENING UP THE GROTTO →