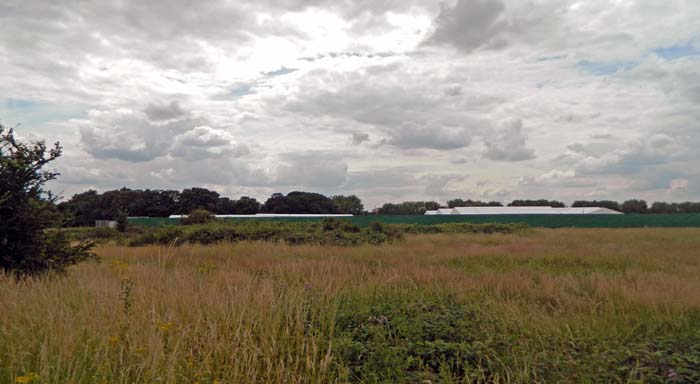 Today (21 July) was the public open day for the Metropolitan Police Muster, Briefing and Deployment Centre on Wanstead Flats. This was the only opportunity for local residents to see inside the temporary base which has been the subject of a good deal of local controversy.

Finishing touches are still being made to the eight-acre base, which is surrounded by an eleven-feet-tall solid fence. The base is the largest of three in London which will operate during the Olympic and Paralympic Games, the others being at Blackheath and Battersea. Up to 3,500 police will use the base over the busiest days of the Games. It will be operational for 90 days, and with a further 30 days in total allowed for its construction and dismantling.

The base was the subject of an unsuccessful legal battle by the Save Wanstead Flats campaign, after Parliament granted a temporary suspension of the Epping Forest Act 1878, which prohibits the enclosure of Epping Forest land. The Corporation of the City of London, which administers Wanstead Flats as part of Epping Forest, accepted £170,000 in compensation for use of the site, which is to be used to contribute toward local improvement works. The Metropolitan Police have, in addition, guaranteed to restore the area to its prior condition when they vacate the base.

The Friends of Wanstead Parklands, though not collectively involved in the campaign against the base, did express two major concerns during the (somewhat unsatisfactory) consultation process.

Now that the base is a fait accompli, these concern remain. Our hope is that the Olympics will prove to be a unique circumstance and the authorities will never again seek to use Wanstead Flats for any comparable purpose.

As far as our visit to the site is concerned, we were given an excellent and unhurried tour, without any restrictions being placed on what we could see or photograph, and with all our questions being answered with every appearance of candour. We wish to place on record our appreciation of this.

Our readers may download a selection of images of the day, plus a police briefing note.

Stuart Monro made a video of our visit, linked here.