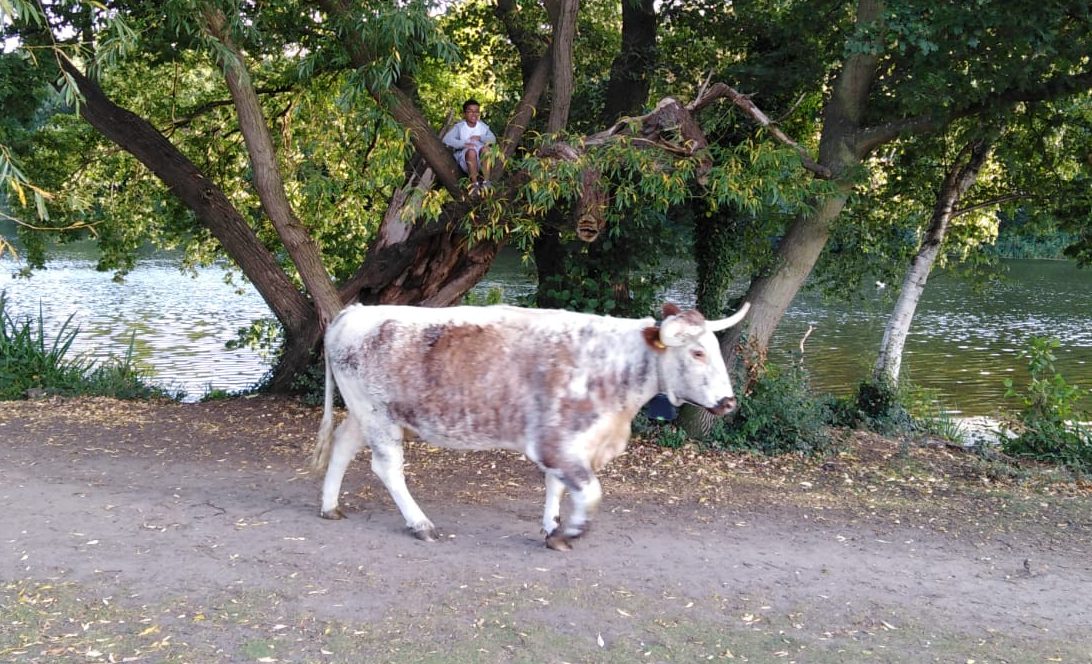 Geoff Sinclair, Head of Operations at Epping Forest, explains why the City of London Corporation’s cattle-grazing trial is good news for wildlife conservation. This article first appeared in the October 2020 edition of Wanstead Village Directory.

Quinny, Nina and Naru are the first cows to be allowed to set hoof in Wanstead Park for 150 years. Residents may recall cows in the area more recently, but that was on Wanstead Flats, where they roamed freely until the mid-1990s Occasionally some may have ventured into the park before being moved on by the keepers. The park is not common land, so there was no right to graze in it. The City of London Corporation, which manages the Grade II* park, has now put selected cattle from its 200-strong herd out to graze as part of a two-month trial, continuing this month.

The pilot is part of a plan to use cattle to better manage and to restore the acid grasslands in the area for wildlife conservation.

Initially, three cows have been introduced: Quinny, Nina and Naru. Two of them are in calf, with the births expected in November, when they will be back in their winter quarters (on a farm near Theydon Bois). If all goes well, the eastern part of The Plain could carry up to 10 cows in future years for late-summer grazing in August and September. The Glade is another potential site.

Although acid grassland is scattered across 27 of the 32 London boroughs, it is mostly now in small fragmented and vulnerable remnants. Wanstead Park, taken together with nearby Wanstead Flats, is one of only four remaining large sites in London (which include Richmond Park, Wimbledon Common and Putney Heath).

As well as rare plant species, Wanstead Park’s acid grassland supports a great diversity of insects and spiders. Butterfies abound – especially small heath, small copper and common blue. These species like the hot ground conditions in the summer and autumn and rely on a mix of tussocks, short grass, bare ground and overwintering dead stalks and leaves to complete their life cycles. Grazing is the best form of management for this type of habitat to maintain this variety and prevent loss to scrub encroachment. Although such encroachment can take many decades because of the drought-prone, nutrient-poor soils, it is now at a point in Wanstead Park that the core of the acid grassland could be lost. Once scrub like broom establishes, it can change the soil and pull in nutrients, which allow in taller, commoner grasses. Grazing is particularly important for the park because to mow with machinery would destroy one of the main features of wildlife interest, the yellow meadow ant hills.

A team of volunteers and staff will be closely monitoring the cows’ welfare and encouraging visitors to admire – but not feed or approach the cattle.
GPS-collar technology is being used, which helps contain the cows by emitting audio signals when they reach a virtual boundary. Location reports are provided at 15-minute intervals, with instant push notifications if the alarm is activated. The boundaries of the area for the cattle follows natural barriers, such as the Perch Pond and lines of trees, which the cows will learn to recognise.

This pilot will help identify better ways to protect Wanstead Park’s historic views at the same time as conserving a wide range of species and supporting an even better ecological balance at the site.

John Philips, Grazing and Landscape Projects Officer at Epping Forest, reports on the City of London Corporation’s successful cattle-grazing trial in Wanstead Park. This article was published in the November edition of Wanstead Village Directory

In our modern world, there is a huge disconnect between the natural world, farming activities and the end-users who benefit from them. A generation or two ago, the memories will be stored of working the land, if only in the summer holidays as a reprieve from city life. This transmission of custodianship and behaviours around these land-based activities have sadly become a distant memory.

The social impact of the cows’ presence in Wanstead Park surpassed our expectations. We had a huge response from local people wanting to get involved with the cows and have been continually taken back by the positive response from regular park users and visitors alike.

The park is not only a refuge for wildlife in an urban area but also for its local people. Getting to work with these large animals daily, it is not lost on me, the calming effect of seeing them in a natural environment, existing, free from the trappings of the human’s higher sense of self and expectation.

The cows’ main job while in the park was to remove vegetation created from the carbon cycle and return it as plant and insect food. This removal around the anthills is especially important to allow solar energy to penetrate the earth to warm up the hills.

Acid grasslands are at risk and diminishing due to nitrification through air pollution and dog faeces, which allows more aggressive, faster-growing plant species to proliferate. The cows help reduce the vegetational mass in a patchwork, reducing competition for sunlight, which allows for slower-growing plants and grasses to survive. This patchwork of varying heights also creates habitat for insects to breed, hunt and perch.

The cows – Quinine, Nina and Nuru – have moved on now, having completed their work. Quinine – who is pregnant – will head back to our farm in Theydon Bois and will graze in adjacent fields to the buildings until she calves. Nuru and Nina are not pregnant, so will travel to Chingford Plain to graze until ground conditions start to deteriorate.

The trial has been a huge success and has secured grazing becoming an annual fixture at Wanstead Park, managed by the City of London Corporation. We would like to thank everyone involved, especially volunteers and local park users, including dog walkers who have had to modify their use of the park to help make this a success.