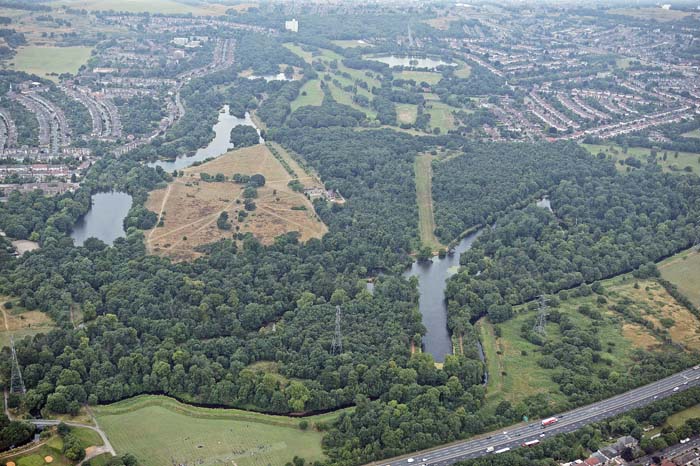 The serpentine lakes are to the viewer’s left.

The precise sequence of work in the construction of the serpentine lakes is not known. Cradock’s Map of 1725 is uninformative: it depicts the Ornamental Water as complete, but does not stretch far enough to the west to encompass the area of the serpentine lakes. In the absence of other information, we cannot tell whether work on them had commenced by that date. All we can say is that the configuration shown in Jean Rocque’s plan of a decade later (1735) bears only a limited relationship to the design shown on his plan of 1745, while the latter is recognisably similar to the configuration which exists now. We can accordingly deduce that the layout of the serpentine lakes was finalised at some point between those two dates. 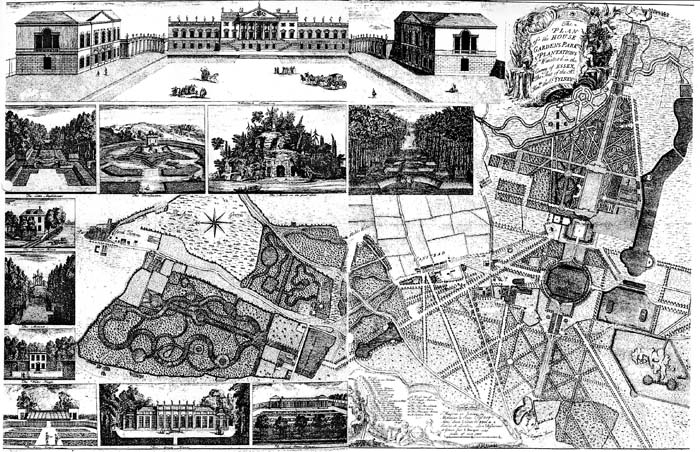 Jean Rocque’s plan of Wanstead Park from 1735. Lord Tylney’s grandiose intentions for extending the house, lakes and gardens were never to be realised. 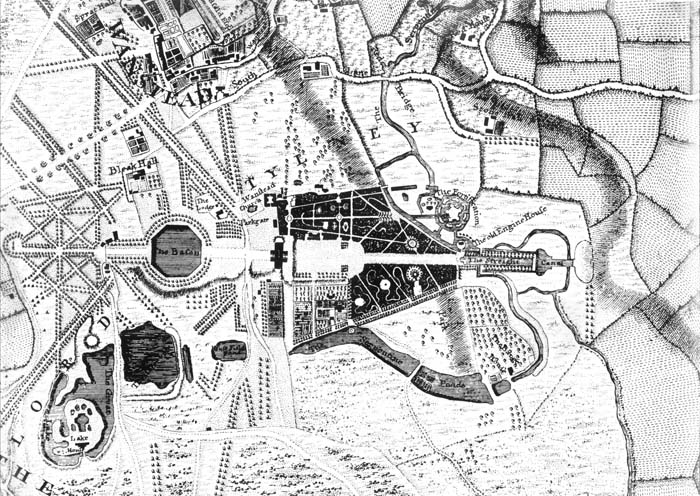 Jean Rocque’s depiction of Wanstead Park in his 1745 “Environs of London” map. The central part of the gardens is accurately surveyed, but the serpentine lakes are sketched in very carelessly. However, it can be seen that they resemble all later plans, so presumably reflect what actually existed by that time.

The serpentine lakes made use of the valley occupied by the nameless stream depicted on Norden’s 1594 map. The extent of this valley is now difficult to reconstruct. At the eastern end, it was clearly a significant feature, as may be seen from the profile of the former Square Pond (now The Dell) which, inside the two dams which define it to the east and west, probably more or less discloses the original ground surface. The Dell is almost ravine-like and clearly mainly natural, though the edges were trimmed to produce the Square Pond’s shape. Neighbouring areas of the Perch Pond are said to reach a depth in excess of 10-15 feet and may be assumed to have a similar profile. The depth of the valley in this area suggests that it was unlikely to have been formed by spring action in present climatic conditions, even if a spring-fed stream appears later to have occupied it. Perhaps, like some of the fossilised landforms in Epping Forest, it was the product of torrential seasonal run-off in periglacial or tundra conditions at the end of the last Ice Age.

The remains of the valley seem to have been traceable in the Heronry Pond for about half of its length prior to the re-lining work of 1906-7 (See Heronry Pond). How far the stream extended to the west beyond that is unknown, though it could conceivably have been fed by a spring as far away as the later Great Lake. Wherever the water source was, its flow was clearly not impressive. Pehr Kalm, who visited Wanstead Park in 1748 said –

The difficulty met him [Lord Tylney] at the place where the house should be built, that there was no water; but money could cure all such things. Where, previous to that time there was scarcely anything but a ditch with a little water in it, we now saw a large flowing river, all made with art and human labour.

By the early years of the nineteenth century, the problem of supplying water to the lake system seems to have led to a drastic rationalisation, with a number of lakes being abandoned.  The Square Pond was drained by 1815, the Reservoir around 1819, the Great Lake was mostly abandoned by the 1820s and the Lake Pond between 1841 and 1850.

All of the lakes are bounded by dams or embankments, still present as substantial earthworks – on the southern side of the Basin; around the eastern side of Reservoir Wood; between the Shoulder of Mutton Pond and Heronry Pond; as a raised path between the Perch Pond and former Square Pond; and between the Square Pond and Ornamental Waters. Culverts and channels were designed to allow water to flow between successive ponds in the chain.

← Overview of the lake system
The Great Lake →