The Second World War in the Park

Long after the events of the Second World War, many of the actual details seem almost unimaginable.

Fortunately we have been left a record: “The Story of Civil Defence in Wanstead & Woodford 1939 – 1945”. This unique book was compiled by Stanley Tiquet at the end of the war to illustrate the activities of local Civil Defence workers and the effects the war had on this part of the Borough. Copies are available in local reference libraries.  See an extract form “It Happened Here” by Stanley Tiquet.

For a better appreciation of events, it is first necessary to set the scene.

There was Civil Defence coverage of the entire borough of Wanstead and Woodford. Districts A – E including Wardens’ Posts 1 – 36 were elsewhere in the borough. Focus here is placed on “F” District (headquarters Aldersbrook Tennis Club) which was broken down into seven Wardens’ Posts. 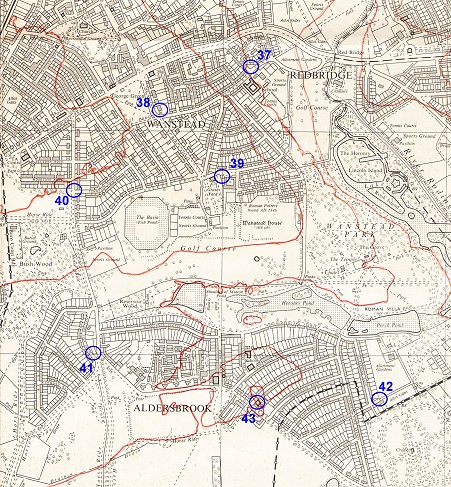 Figure 1, Wardens’ posts.
With the permission of the controller of H.M Stationery Office. © Crown Copyright.

These Posts virtually surrounded Wanstead Park. It will be appreciated that the first priority of those who manned each Post was their local buildings – mainly housing – and the residents in them, rather than open spaces like the Park, Wanstead Flats or Forest. Most local records tell of events in this light. The reader must therefore use their imagination to set events in the Park and neighbouring Flats within the context of what was going on in the immediate vicinity.

The Posts were normally part-buried and built of concrete. Below ground, six persons might seat themselves, some on the bed or bunk personally provided by Wardens. A wall-flap table, telephone on wall bracket, two folding chairs and an electric fire represented generally the official issue. A boiling ring could be plugged into a point. But there was no water supply and no toilet accommodation. Neighbours obliged. In such conditions, many Wardens spent hundreds of hours. At night there were two of them on each shift. During the day, one Warden was on duty.

What Fell from the Sky

Details of what fell from the sky are as follows 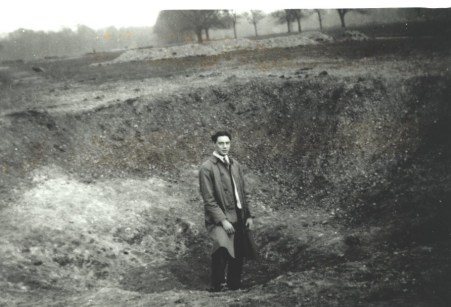 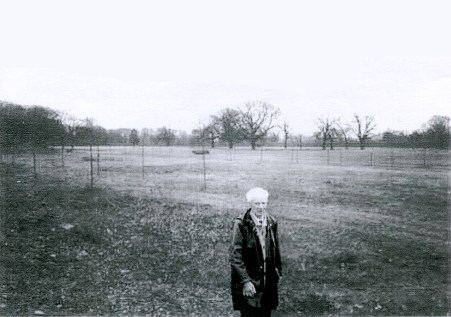 An idea of the sort of damage which could be caused by a 250 lb high explosive bomb is given by Figs. 2 & 3. Interestingly, these pictures show the same man, in the same place, but approx. sixty years apart in time. Fig.2 shows Mr Ted Godden, a former resident of Harpenden Road (adjacent to the park), standing by a bomb crater shortly after the device had exploded, during the blitz (1940-41). Fig.3 shows the same Mr Godden at the same point in 2000 i.e. sixty years later, during clearance of undergrowth on the south edge of Chalet Wood, in preparation for the planting of a double row of trees. Such is the passage of time in healing the superficial wounds of the park! They were only too real during the war.

Fig.4 is from an aerial record compiled by the government in 1944 and shows Wanstead Park and surrounds on 7 August 1944. The H.E. and V1 damage to Heronry Pond can be seen, plus V1 damage in Tennyson Avenue and in Wanstead Park Avenue (just in East Ham but dealt with by Wanstead CD). What appears to be a heavy anti-aircraft battery can also be seen on Wanstead Flats. 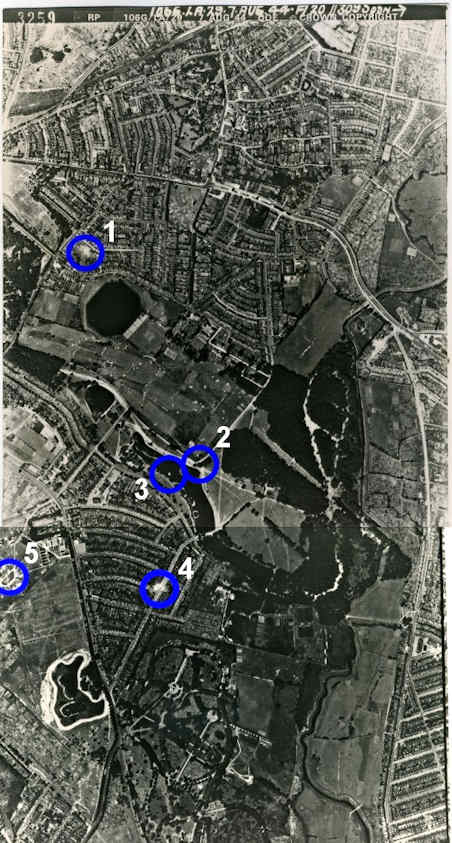 Throughout the war, the area was sporadically subject to enemy aircraft intruders dropping various types of bomb. 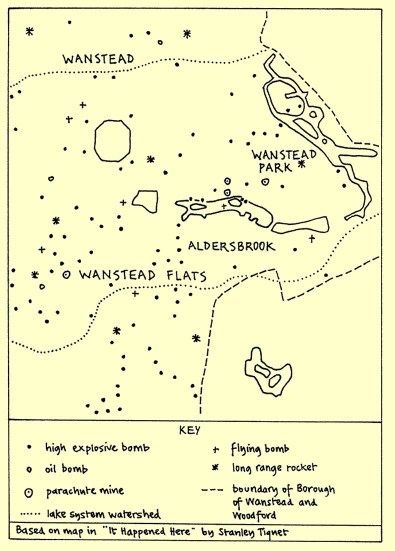 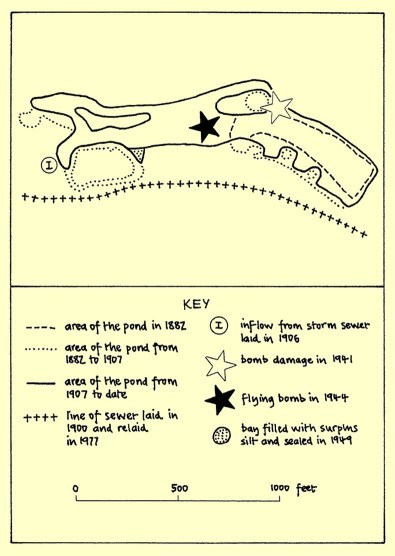 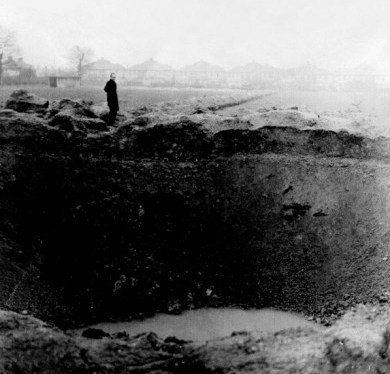 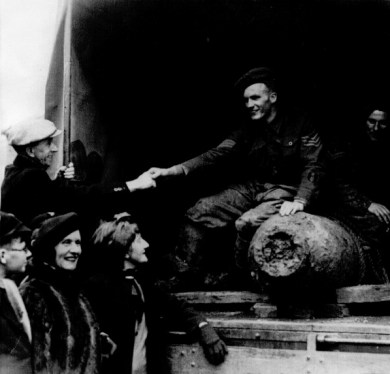 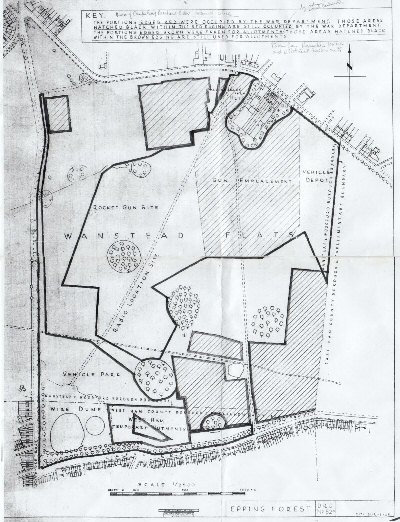 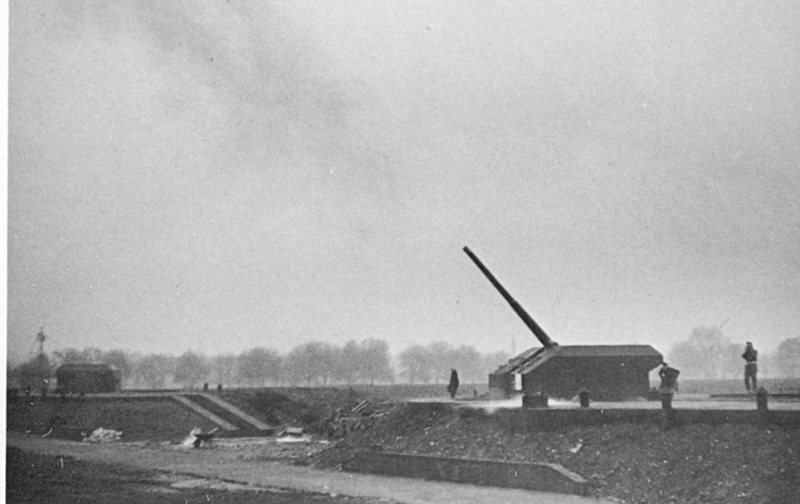 Figure 10. Anti-aircraft emplacement on The Flats.

One of the targets of the bombing was an anti-aircraft emplacement situated on Wanstead Flats. This was in action throughout the blitz from autumn 1940 and the subsoil vibration caused by continuous heavy firing had an extremely adverse effect upon houses throughout the area, quite apart from any bombing. Such subsoil vibration appears likely to have had an even more damaging impact upon the drainage system laid out beneath Wanstead Flats in 1906. Likewise, the movement of many heavy lorries supplying ammunition for the guns themselves, would have been very detrimental to the subsoil drainage system (see Figure 9 for vehicle depot location). In addition, much of the area of the drainage system was given over to allotments for the duration of the war, which could well have resulted in its disturbance.