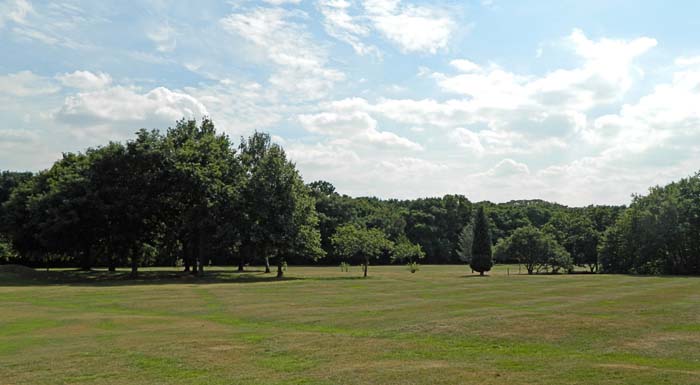 View towards the site of The Reservoir from the north east. The bank is disclosed by the slight break in slope marked by a line of trees.

The first depiction of The Reservoir is on Rocque’s 1735 Map, suggesting that it was planned alongside the other water bodies in Wanstead Park in the early 18th century. There it is depicted as being broadly rectangular in shape, with slightly curved north-eastern and south-eastern corners, and two small rectangular islands. However, all later maps are consistent in depicting The Reservoir, as actually constructed, with a slightly less regular shape, and with no islands in it. A long-established road or path is depicted as being carried on a causeway along the Reservoir’s western side, separating it from the Great Lake. This road was upgraded by Hon. William Long-Wellesley after 1816 and is now known as Blake Hall Road. Another embankment separated The Reservoir from the Lake Pond to the east.

Humphry Repton’s ‘Plans for the Improvement of the Grounds at Wanstead House, Essex, a Seat of W. Long Wellesley Esqr’, dated 1813, contains images of The Reservoir, before and after his proposed changes to the planting and fences. It may be that Repton’s optimistic assumptions about the water supply were regarded as unrealisable, and The Reservoir was drained around 1819, with all later maps showing it as a wood. Of the original area of the Reservoir, about a quarter has been built over, perhaps a half remains as woodland within the public park, and the remainder has been cleared of trees and is part of the golf course.

← The Great Lake
The Holt Channel →