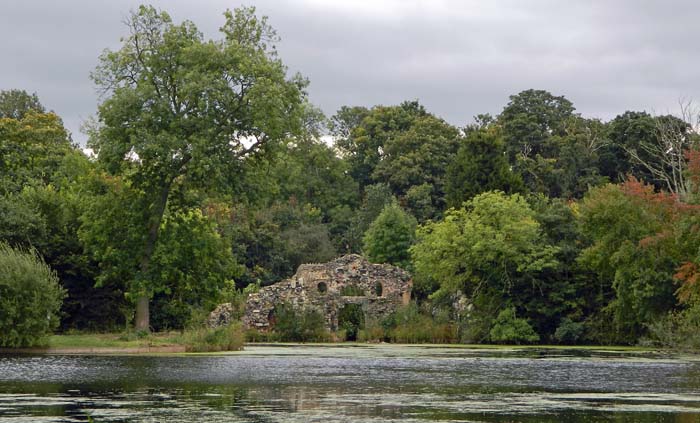 View across the Ornamental Water toward the Grotto.

The ‘Ornamental Water’ runs for about 1km from roughly north-west to south-east. It consists of an inter-connecting system of channels in the eastern part of Wanstead Park. These encompass a number of islands in the northern section, namely Lincoln Island, Rook Island, The Fortification and Engine House Island. From the Straight Canal the Ornamental Water continues south-east as a single channel. 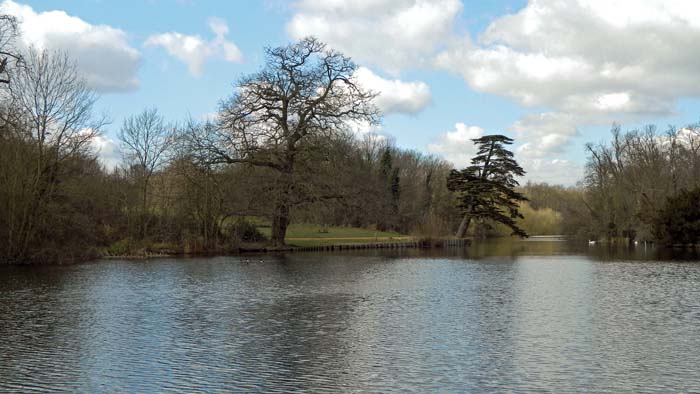 The Ornamental Water seen from the western end of the Straight Canal, looking toward the “Map Tree” and the Long Walk.

The northern part of the Ornamental Waters was partly constructed by modifying watercourses which already existed by the early years of the eighteenth century. The western arm appears in large part to follow that of the garden canal depicted on Jan Kip’s view to the east, while the eastern arm is apparently based on the natural course of the River Roding, visible on the same image.

At some point between about 1712 and 1725, the strip of land between the garden canal and the River Roding was broken up into several islands, with the channels between forming a series of vistas. The northern part of the garden canal was filled in. The Ornamental Water is first depicted in broadly its present form on Cradock’s Plan of 1725, which shows the Ornamental Water being fed from the River Roding to the north and terminating with a butt-end to the east of the Square Pond. A weir to discharge the overflow from both the Ornamental Water and the Serpentine Lakes was located nearby. Further elaborations were constructed in the vicinity of the Straight Canal, with an outer canal wrapped round it at a lower level.

By the time of the Searles plan of 1779, there had been significant alterations. The channels of the Ornamental Water had been widened and their outline softened in order to give the lake a more naturalistic appearance. The Straight Canal had been simplified, and the River Roding had been severed from the system and canalised behind it at a lower level (the former weirs having been removed, perhaps to make flooding upstream less likely). The Grotto was built around 1760-4 as a focal point on the western side of the reconfigured lake.