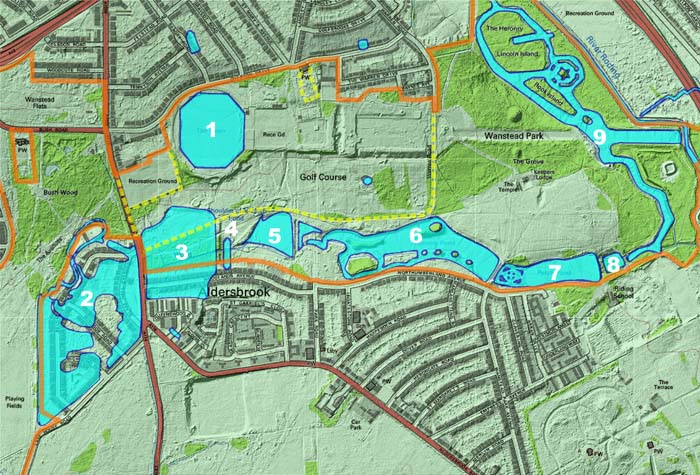 Wanstead Park’s lake system at its greatest extent, around 1800. The lakes are overlaid on LiDAR and Ordnance Survey images of the present-day landscape to assist orientation. The orange line represents the boundary of the Grade II* listed park, while the yellow dashed lines represent current divisions in ownership. Key: (1) The Basin, (2) The Great Lake, (3) The Reservoir, (4) The Lake Pond, (5) The Shoulder of Mutton Pond, (6) The Heronry Pond, (7) The Perch Pond, (8) The Square Pond, (9) The Ornamental Water. Lidar imagery © the Environment Agency, Ordnance Survey imagery UKMap © The GeoInformation Group 2013. 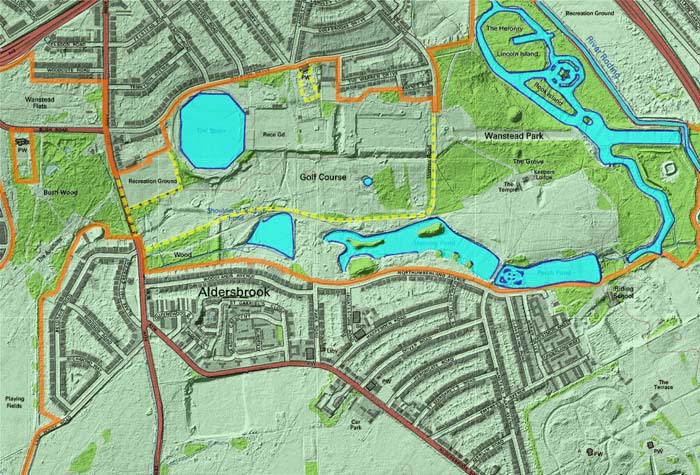 The lakes in 2013. Four major water bodies have been abandoned since 1800, while the Heronry Pond has been reconfigured and reduced in size. Lidar imagery © the Environment Agency, Ordnance Survey imagery UKMap © The GeoInformation Group 2013.

The most important surviving features of Wanstead Park’s eighteenth century landscape are its lakes. Extensive though they are – totalling some 43 acres in size – they are merely the remnant of a waterscape which was once considerably larger. Of the nine significant water bodies created between 1715 and 1745, only five now survive: The Basin; Shoulder of Mutton Pond; Heronry Pond; Perch Pond; and the Ornamental Water. The others – the Great Lake, the Reservoir, the Lake Pond, and the Square Pond – were all abandoned in the first half of the nineteenth century. The reasons for this are not explicitly documented, but clues on maps from the period suggest it was a result of the perennial problems with inadequate inflow and leakage which will be referred to in the articles in this series. The lack of a resident owner at Wanstead House between about 1764 and 1812 may also have resulted in a lack of maintenance of the system which was later judged too difficult or expensive to reverse.

Our purpose here is briefly to discuss the origin of the lakes, and to outline something of their subsequent history. Current issues relating to their maintenance and restoration will be dealt with elsewhere on this site. The articles have drawn heavily on texts which formed part of the 2013 Strategic Assessment and Conservation Measures for Wanstead Park. This project, which is intended to feed into a future Conservation Management Plan for the park, was commissioned by English Heritage and carried out by Compass Archaeology, with extensive contributions by the Friends of Wanstead Parklands.

← The Lake Pond
Overview of the lake system →