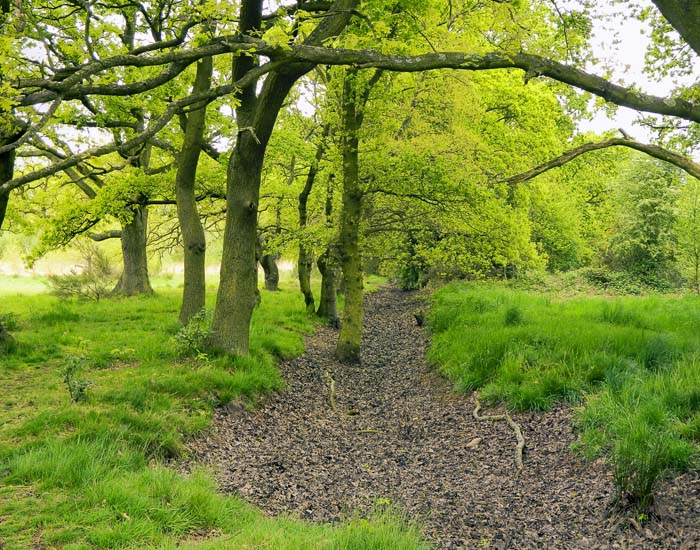 A surviving section of the Holt Channel on Leyton Flats.

The “River Holt”, or “Holt River”, or “Holt Channel” was an artificial watercourse constructed by Adam Holt, gardener to Sir Richard Child, later Earl Tylney of Castlemaine, in the early eighteenth century. This was undertaken to gather water from Leyton Flats (an area of higher ground to the north-west) and use it to feed the lakes and water features of Wanstead Park. Later, it supplied the newly-constructed chain of serpentine lakes via The Basin. The Basin itself appears to be self-sustaining, being presumably mainly fed by ground-water or springs. Since bisected by the cutting for the Central Line, The Holt Channel is clearly shown on the 1841 Tithe Map as feeding into the northern side of the Basin via a pond to the north of the Park. It is depicted in the same way on the 1850 Wellesley Estate Map. This pond is depicted on a number of earlier maps, first being depicted on Rocque’s 1735 Map (although this does not show the channel connecting it to the Basin).

The Holt Channel began in the vicinity of what is now the Snaresbrook Crown Court. The 1876-82 Ordnance Survey map shows three linked channels draining Leyton Flats and Gilbert’s Slade. These have since been modified or partly filled in, and it is in any case not clear how far the system shown on the map reflects Adam Holt’s original plans. However, stretches of these channels survive in good condition and can fill with water during the winter months. The route of the main channel can be traced to near the point where it crossed Hollybush Hill. It then met the road now known as New Wanstead next to the former British Queen public house. Just to the north was a sluice pond, which may have been designed to capture excess water in periods of heavy flow. The next part of the route, now vanished, is closely followed by Spratt Hall Road, after which it turned roughly south toward a pond to the north of the Park. This was drained between 1894-6 and 1919, according to OS Maps, with houses constructed in the area it once occupied. No obvious sign of the Holt Channel exists today within the registered park.

Further information about the Holt Channel can be found in Barry Hughes’ essay ‘Wanstead Watercourses: The River Holt’.

← The Reservoir
The Basin →