Overview of the lake system 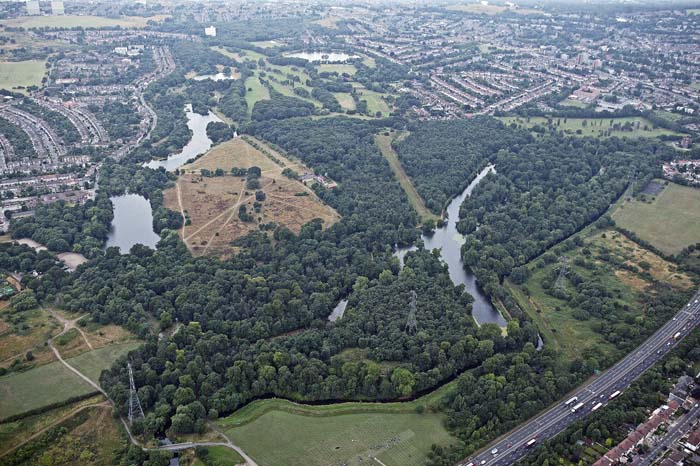 Aerial view of Wanstead Park from south of east.

To the west and south of the park, a cascading chain of lakes was created which partly utilised a natural valley running from west to east, though this was undoubtedly much enlarged. Norden’s 1594 Map of Essex depicts a tributary running into Wanstead Park from the River Roding. This natural stream, which Smart Lethieullier described as “a well of exceeding fine water”, was probably one of the main factors which had earlier attracted prehistoric and Roman settlement in the area which is now known as The Plain.

A number of water features pre-date the existing lake system, and have been adapted and incorporated into it. The most securely dated is The Basin, which was adapted in the early eighteenth century from a pair of fish-ponds commissioned by Sir Josiah Child some time before 1691. It appears to be fed by groundwater or springs. Three additional features are all depicted on Jan Kip’s view to the east dating from around 1715. The first was the Garden Canal, which was filled in after 1715. The other two – the Straight Canal, and an additional unnamed canal – were subsequently incorporated into the Ornamental Water. All three may well date from the first phase of the landscaping works commissioned by Sir Richard Child (later Viscount Castlemaine and Earl Tylney of Castlemaine) between 1699 and 1715. However, they could equally date from his father’s time or even earlier.

It was Sir Richard Child who was responsible for the defining moment in the history of the lake system of Wanstead Park. In tandem with the rebuilding of Wanstead House after 1715, he commissioned a second phase of landscaping work, which involved the creation of a series of vast new water bodies on three sides of the park, the surviving elements of which give today’s park its unique character.

← The lake system of Wanstead Park: introduction
The serpentine lakes →